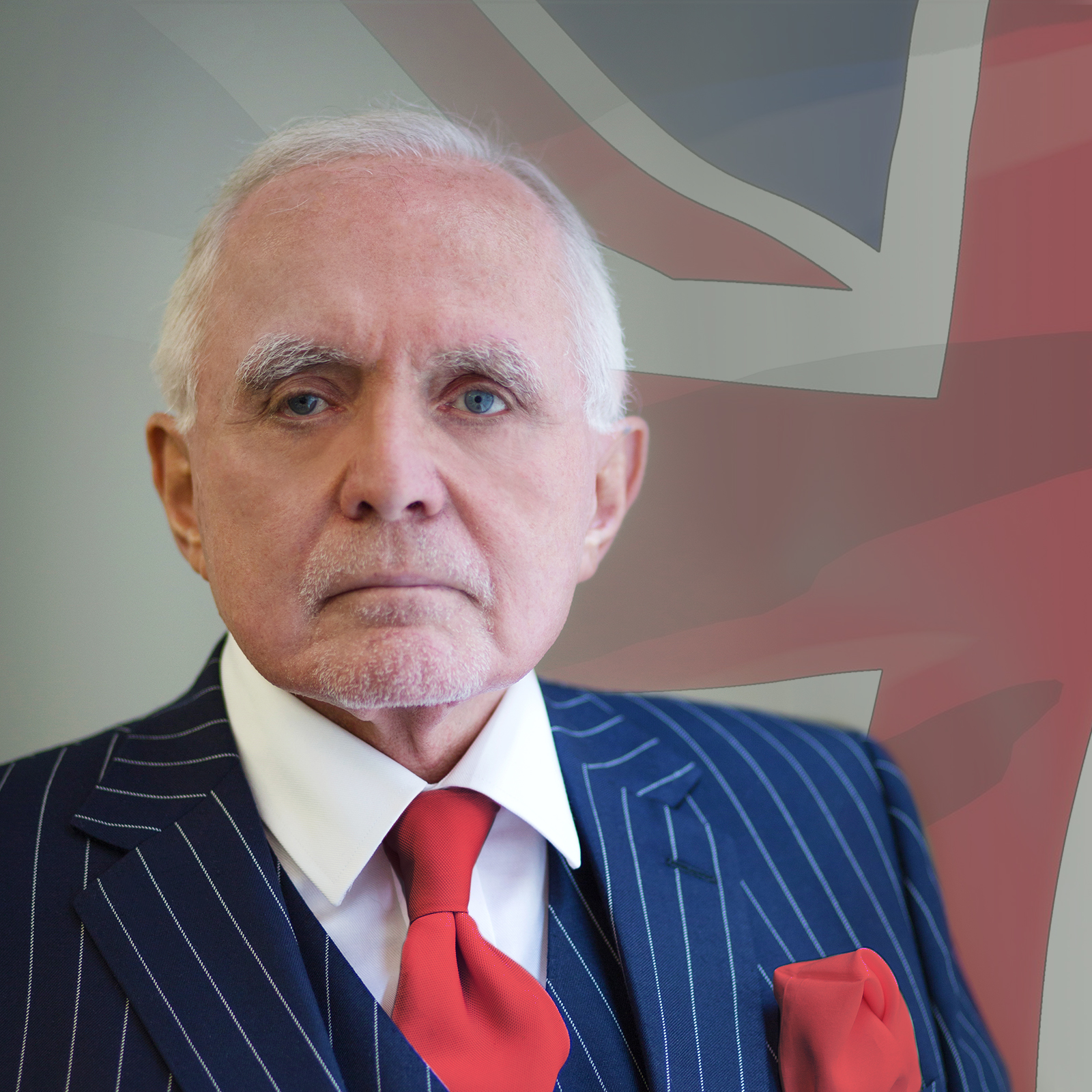 Daniel Peña is the founder of Quantum Leap Advantage (QLA), the revolutionary method for super success with over 28 years of proven track record that has produced over a trillion dollars’ worth of equity/value with his mentees and devotees since 1993!  Thus making him known as The Trillion Dollar Man! Peña with his mentees and devotees have created an unprecedented level of super success, producing from 7 figures to 11 figures wealth creation in various industries around the world! Peña’s principle instrument of success is his  7 step QLA Methodology that he personally used to create $450 Million! Together with laser beam focus, Peña has mentored and coached countless to achieve their dreams.

Daniel S. Peña is Chairman and Founder of The Guthrie Group (TGG), an investment consortium specializing in facilitating transactions, founded in 1997. With offices in the UK and Asia, it has acted as principal, advisor, and agent to global and regional companies and institutions. Mr. Peña was also founder, former Chairman, President, and Chief Executive Officer of Great Western Resources Inc., (GWRI), a Houston-based natural resource company public on the London Stock Exchange (LSE). At the time of Mr. Peña’s decision to retire, GWRI was operational in the US, the Gulf of Mexico, the UK, and South America and had a public market capitalization of $450 million (approximately $1 billion today), with interests in coal, and oil and gas exploration and production, drilling and construction pipeline. At the time the company was acquired in January 1997, he was the biggest individual shareholder.

In an 8-year period, starting with only $820, Mr. Peña grew Great Western Resources to $450 million while energy prices collapsed, the price of oil dropped from $40 to less than $8 per barrel and more than 10,000 energy companies in the US alone went out of business. During this massive energy decline, GWRI grew a phenomenal 55 million percent.

Prior to Mr. Peña’s founding of GWRI, he was the Chairman of JPK Industries, Inc., a vertically integrated company in the petroleum industry, involved in oil and gas drilling, operating, production, crude oil refining, and marketing. As co-founder, he helped grow the company to $50,000,000 in three years. Prior to JPK Industries, he was with the investment banking firm of Bear Stearns and Co. where he advised clients throughout the US and internationally.

Subsequent to this tenure at Bear Stearns, he served as President and CEO of Kennedy Industries Inc., a company with major interests in real estate, insurance, financial services, and the entertainment industry. While in the entertainment business Kennedy Industries was involved in TV/movie production and investment.  During this time various entertainers and actors were employed and, or engaged: Tony Curtis; Bob Goulet; Dolly Parton; Hoyt Axton; Bob Guccione; Dick Martin; Martin Landau; Karen Black; Peter O’Toole; Nick Nolte; Malcolm McDowell; Helen Mirren; John Gielgud; amongst others.

While still in graduate school, he was made a principal in a real estate firm and led the nation in sales.

Since leaving Wall Street and while building his own companies exponentially, Peña has successfully negotiated transactions with many multinationals, all BIG 4 accountancy firms, many major international financial institutions, and law firms, and several foreign governments. In addition, he has successfully transacted business with both the Church and Bank of England.

He has been a lecturer for the Continuing Education for CPA’s program and has taught pro bono a yearlong course to business students on entrepreneurism at his alma mater, California State University, Northridge. He also volunteered his time to Rebuild LA subsequent to the devastating riots near his childhood home in East Los Angeles and served at the request of the Mayor on the Executive Committee for The Alliance for a Safer LA.

In recent years, since retiring, he has given keynote addresses, interactive workshops, seminars, and conferences on both sides of the Atlantic and Pacific on building businesses exponentially and has been recognized as a “super success high-performance business coach” and mentor.

As a quantum growth strategist, Mr. Peña was the principal speaker at the prestigious Center of Entrepreneurial Management’s annual management course. Mr. Peña was also the speaker at “Success Magazine’s First Annual Conference” on entrepreneurism. He was asked to articulate his methodology on “Managing Growth and Diversification” as well as “Growth Strategies”. He has also articulated his methodologies on “How to Achieve Explosive Growth” to the YPO’s (Young Presidents Organization) North and South America International Resource Convention. In addition, Mr. Peña has written a column on “Explosive Growth Strategies for Agora Publishing”, one of the largest financial newsletter publishers in the world. Agora Publishing researched, produced, and distributed the highly successful financial instructional product – Financing Your Dream – where Peña walks you through a step-by-step methodology to achieve your Dream.

Peña also participated as keynote speaker in the launching of The Entrepreneurs Club by the Grampian Enterprise Board for the regional government in Aberdeen, Scotland, near his home, Guthrie Castle.

He has also been a keynote speaker at the prestigious De Amstel Club in Amsterdam and The World Trade Center Clubs both in Rotterdam and Amsterdam where his topic was “Explosive Growth”. Mr. Peña also led The Executive Studies (London) series Chief Executive Program featuring the “21st Century Boardroom and Quantum Growth”. He was also retained as a consultant to bring QLA methodology to one of the top 25 companies in the world, where Peña mentored for 10 years Dr. Klaus Kleinfeld who became President/CEO of Siemens; Former Chairman/CEO of Alcoa; Former Chairman/CEO of Arconic. Dr. Kleinfeld is now, Director, heading the biggest deal on the planet worth $500,000,000,000 building the next megacity of the future, NEOM.

He has been on the roster of Who’s Who in America, was a nominee for INC magazine’s Entrepreneur of the Year in 1989, and was chairman and major shareholder of Success Development, Inc. (SDI), a company on INC’s 500, 1996 and 1997 list of fastest-growing privately held companies (#152 and #195 respectively) in the US. He was also chairman and stockholder of the company which was presented with the “MKB Innovation Prize of 1998” award for the company of the year by the Economic minister of the Netherlands (Holland). The CEO of that same company was nominated “European Entrepreneur of the year, 1999”. He was also a recipient of the “First Honorary Member of Entrepreneurial Nijenrode” award in Feb 1998, which was issued by the Entrepreneurship Club of Nijenrode University, The Netherlands.

He was appointed to the US Presidential Roundtable Senatorial Commission in 1991. He has served on the Alumni Association Board of California State University, Northridge, where he graduated with a BS in Business Administration in 1971. He has also served as a member of the University’s Trust Fund Board, serving on the finance and investment committees, and the University’s Foundation Board. He is a 1972 graduate of the New York Institute of Finance.

Mr. Peña was a financial advisor to entities as diverse as the Vatican and the Los Angeles Police Protective League.

He has been the recipient of many awards including the “1981 Latin Business Association Outstanding Business Owner” award: the “1994 John Regan Award for Excellence” by the Center of Entrepreneurial Management; the American International Real Estate Expo and Conference (AIREEC) USA 2008 “Man of the Year Award”; and the 2008 AIREEC “Inspirational Leadership Award”. He has been featured in many US publications such as the Los Angeles Times, wherein he was featured twice, first in 1983 (an article that won the Pulitzer Prize) and second in 2021. He was also featured in dozens of UK publications such as The Times, and The Financial Times, along with the Dutch publications OBJEKT, Bouwteam, and Limburg Bagblad. He was also seen on US, UK, Chinese, Philippine and German television. And most recently, he was a recipient of the “Order of St John” appointed by Her Majesty The Queen (in October 2017) at the Washington National Cathedral, Washington, DC.

Peña had a distinguished career with the US army, entering voluntarily as a private and graduating from Infantry Officer’s Candidate School (OCS) a 2nd lieutenant at Fort Benning, Georgia, serving as an Infantry, Military Police, Intelligence and Security Officer at NATO Headquarters, during the late 60s.

Mr. Peña is also an active sportsman, having received the Bronze Show Award, 1976, from the Los Angeles Athletic Club, and the Award of Merit in 1977 from Sports Illustrated. He was featured in People’s Court Judge Joseph Wapner’s book, “A View from the Bench” as one of the most courageous cases he adjudicated in his thirty-year career.

He is a member of the Jonathan Club in Los Angeles where he was inducted as the first minority member in 1981! This landmark event was 6 years ahead of the Federal Mandate to accept minorities in 1987! He is also a member of The Clermont Club.

On October 12, 2021, Dan became a UK citizen, while also maintaining his US citizenship. He had also announced that day that he will be opening an exploratory committee to ascertain the probability of him attaining UK public office.

Though he still travels extensively with his wife Sally, throughout the US, Asia, Africa, South America, and Europe overseeing charitable and business interests, he still gives his week-long exclusive QLA High-Performance Business Success Seminars at his 15TH-century storybook home Guthrie Castle, Scotland. His three grown children, Kelly, Derrick, and Danny all live in the US, pursuing their own interests.

Dan Peña currently serves as Chairman of his personal holding and other growing companies in various industries in the US, Europe, Canada, and Asia.